If you’ve ever browsed a thrift store or poster shop, you’ve probably come across vintage paintings of fruit in all their botanical detail. But beyond their beauty, many of these illustrations are so accurate that they’re still used today to identify and examine varieties decades after they were drawn — including by the USDA, which has more than 7,500 of these paintings.

When the Division of Pomology was founded by the USDA in 1887, photography was not a widespread medium. Over four decades, the division turned to more than 65 artists to create watercolors for pomologists to use in their studies of growing and propagating fruit to prevent disease. The 365 page compendium “An Illustrated Catalog of American Fruits & Nuts” includes paintings by 21 of those artists. Pomologist Adam Leith Gollner describes the fascination with fruit and the quotidian task of growing fruit in the late 1800s.

The following interview has been edited for length and clarity.

KCRW: Tell us about why these drawings exist.

Adam Leith Gollner: These paintings exist because they were scientific and documentary images in a time before we really had color photography or DNA testing, or other means of identifying fruits. The paintings were the main way that our pathologists were able to ID fruits.

I always think of these paintings as being the food cousin to the Audubon bird paintings.

Both of them are the sorts of images that we just want to look at. And there’s something about the colors. In the case of these fruit paintings, I always thought of them as vitamins for our eyes, in the way that fruits are good for us. But these paintings are also good for the spirit. 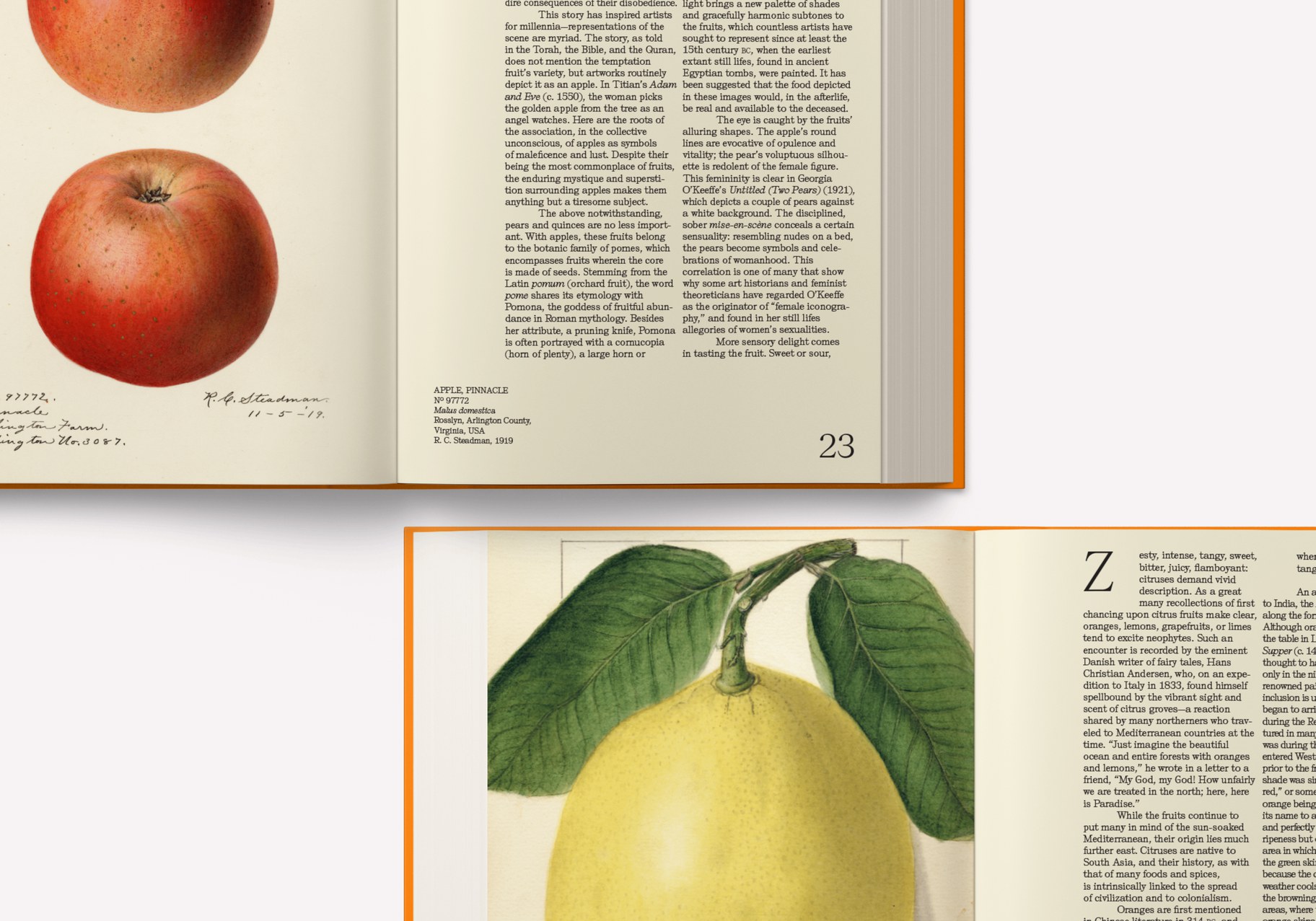 The collection of watercolors are divided into categories including citrus, pomes, subtropical fruit, and drupes. Photo courtesy of Atelier Éditions.

It’s just so moving to realize the commitment of the people who did these to document what they were seeing.

It was a big undertaking that lasted for decades, from the late 1880s until the early 1940s. Thousands upon thousand of these paintings and drawings were produced and commissioned by the USDA’s Division of Pomology. … To people like you and I, their primary role is aesthetic, but they were and remain scientifically important and useful.

Who made these paintings?

A total of around 20 painters were responsible for most of it, and 50% of the artworks were done by just three women. So women played a really crucial role in the program. 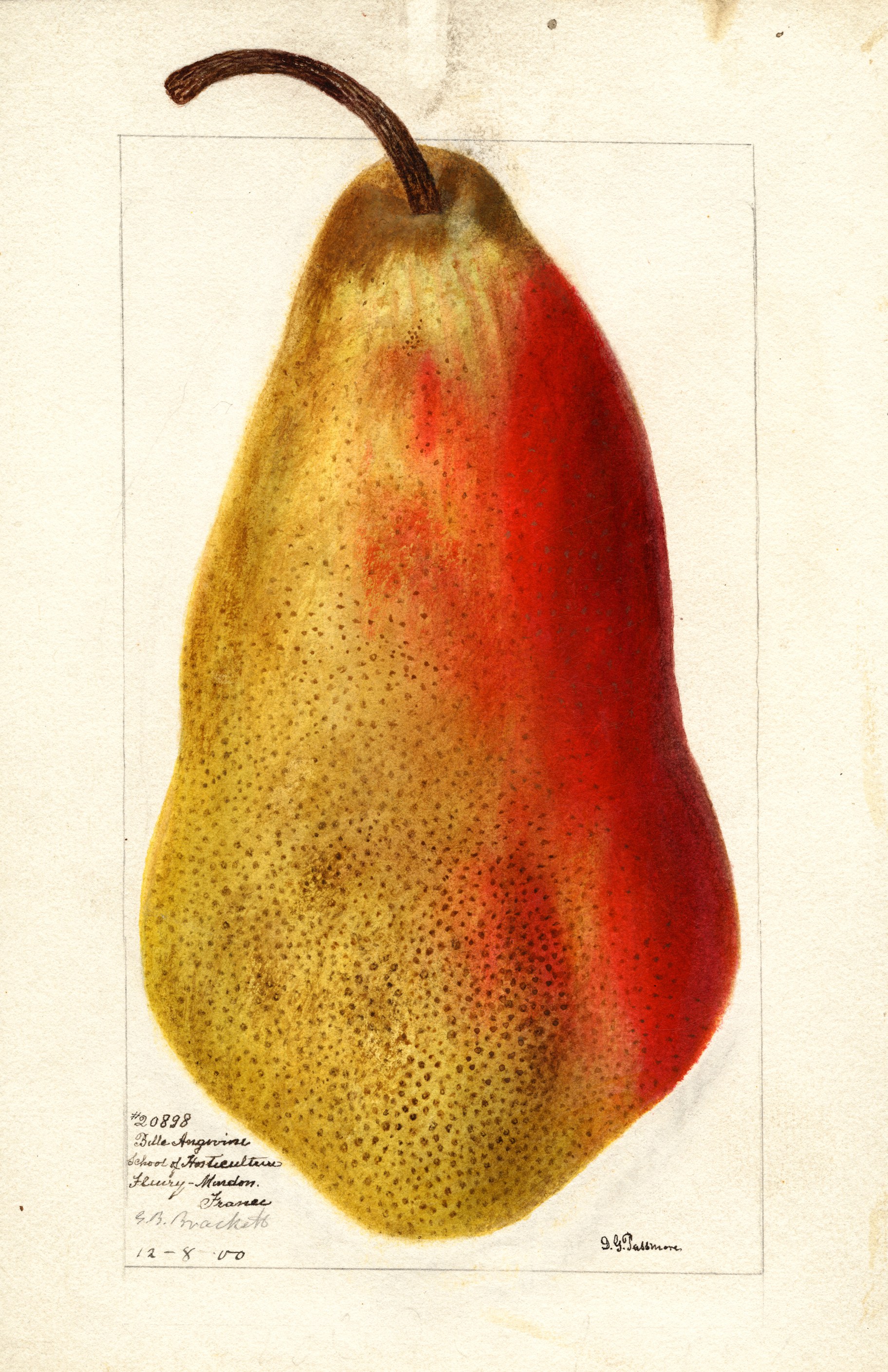 A depiction of a Belle Angevine pear was painted by D. G. Passmore in 1900. Noted for its beauty, the fruit was less desirable for its flavor. Photo courtesy of Atelier Éditions.

Can you describe the culture of the day that plays into a fascination around fruit?

If we go back to the late 1800s, life was very different then, and most people lived in rural areas. Growing fruit was central to most people’s livelihoods. They had them in their backyards. They had them on the farms. [It] was just something that everybody did. … There was also a lot of enthusiasm for the potential around fruit. We didn’t really know exactly what the possibilities were.

Today we live in a world where we all have blueberries, for example, at the supermarket year round from all over the world. And blueberries are a $4.5 billion industry. But in the late 19th century, blueberries weren’t even domesticated yet. They weren’t a thing that we knew how to grow. The same applied with many other types of fruits. So the whole idea of creating a division of pomology was because fruit groves and orchards were seen as crucial to American prosperity. 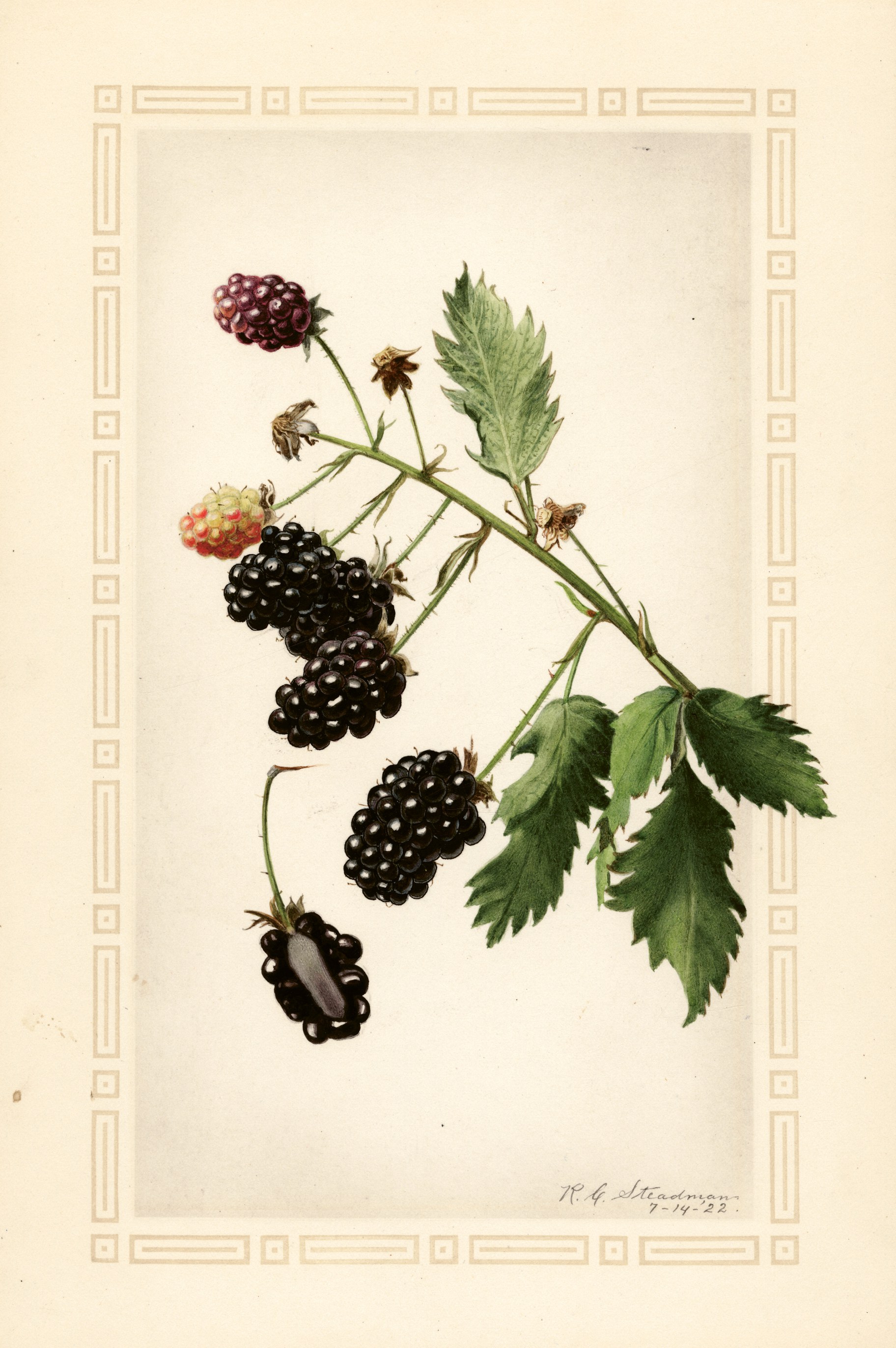 Royal Charles Steadman painted these blackberries. He was a jewelry designer before joining the USDA in 1915. Photo courtesy of Atelier Éditions.

Elizabeth White had a role in creating a domesticated blueberry. Could you talk a bit about that and about her?

Elizabeth White is known as the blueberry queen. In 1910 she received this pamphlet called “Experiments in Blueberry Culture.” At the time, the blueberry was what they call “strangely overlooked,” because they knew it was sweet. We’ve all had those wild, tart, little blueberries. But the domesticated blueberry was just a dream. They were doing experiments … trying to figure out how to grow it. And you have Elizabeth White, who lived in the Pine Barrens and felt that there was a real potential to have a crop that could be immensely successful. And she was right.

As part of their experiments, paintings were made of some of the successful specimens that they managed to discover or create. What’s kind of interesting about it is that they also came across some blueberries that weren’t exactly what they were looking for, whether they had aluminum colored exterior, or were white or red blueberries. And all of this came back into importance recently, because there’s a new type of blueberry that’s entering the world marketplace called pink blueberry. 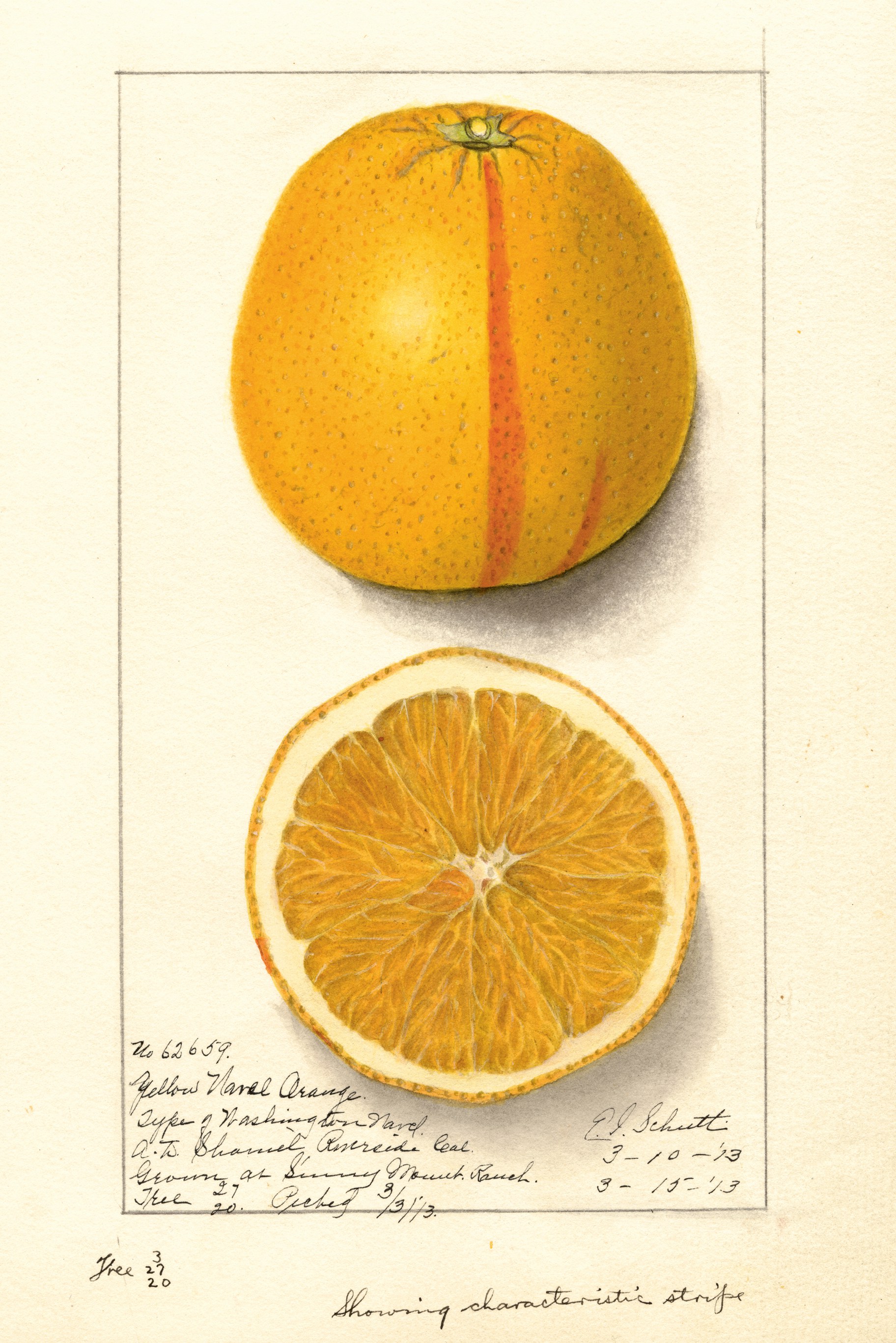 In genetics, the term chimera to describe citrus fruits is taken from the creature of Greek mythology, and is represented by the modification in color or shape in the Washington Navel orange. Photo courtesy of Atelier Éditions.

Are the images of these fruits that are documented backed up with seed in a vault somewhere?

The USDA has all these germplasm repositories. And not just the United States, but most countries around the world have their crops backed up in seed vaults. In Geneva, New York, for example, you have the apple collection of the USDA. And in California, you could have a citrus collection, which I believe is in Riverside. When you go to these facilities and you walk through the trees, you really get a sense of how vast biodiversity of a certain species is.

You wrote a book about explorers who went out to find fruit. Can you give us a taste of what fruit hunting is like, such as your experience of tasting grapes and Georgia and Armenia?

The wild center of origin for grapes is in the Transcaucasus, somewhere around Georgia or Armenia, and I went to this center for grape vine planting material in a little village called Saguramo. It’s got hundreds of varieties of indigenous grapes. I happened to be there in autumn when it was grape season. And every plant was a different variety of grape. You taste all these different grapes that have different colors and sizes and flavors. Some of them were sweet, some of them were bitter, and some of them tasted like olives. 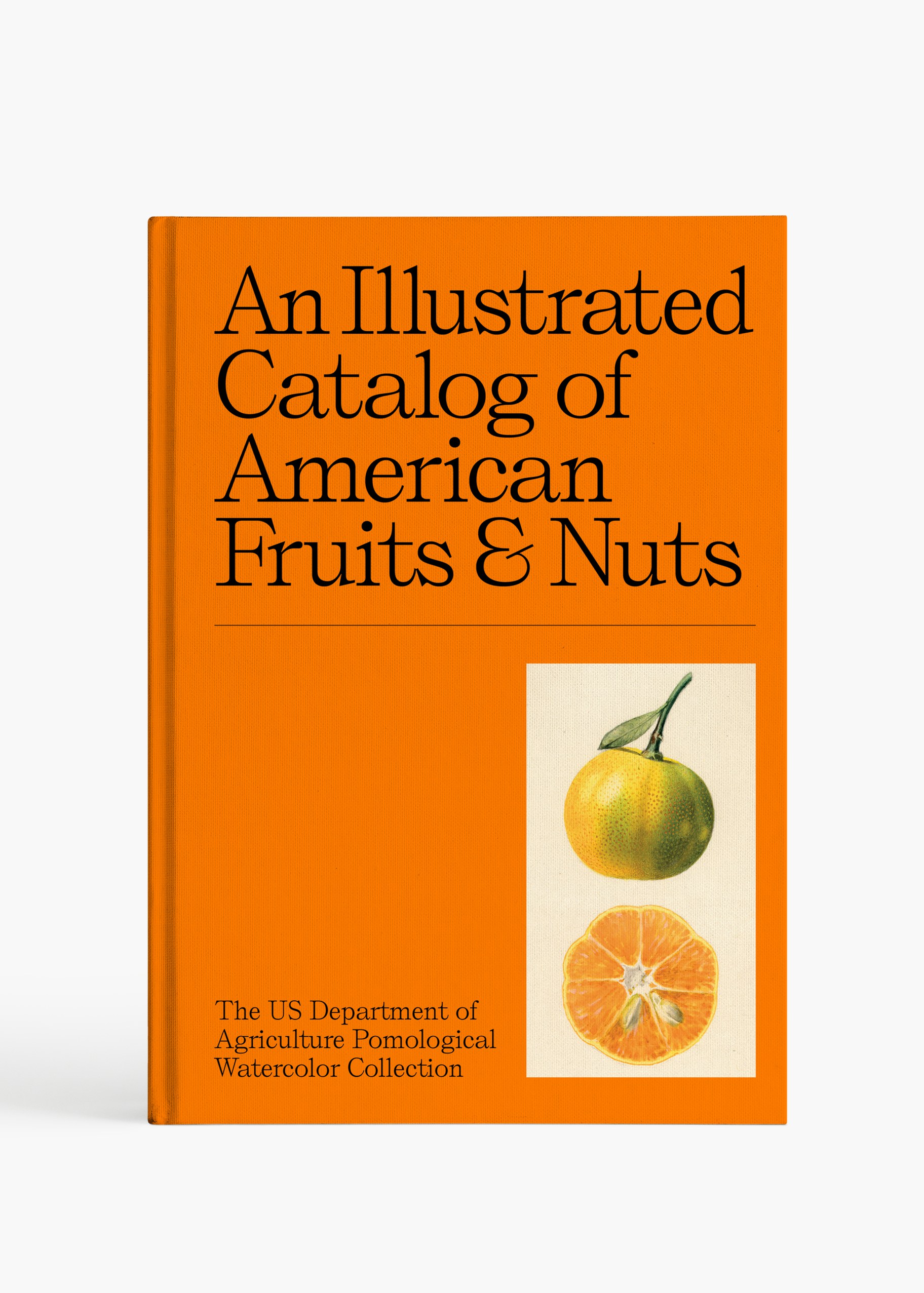 “An Illustrated Catalog of American Fruits & Nuts” is a collection of watercolors used by pomologists at the USDA to study growing, propagation, and to prevent disease. Photo courtesy of Atelier Éditions.

What I find looking at this collection of paintings is how a person could become obsessed.

I really feel like looking at the paintings is also the equivalent of walking through those rows of grape vines and tasting those grapes. These paintings are activating our imaginations and they have this kind of transporting effect on us … These are examples of modernist art and they have a deeper potency than a photograph.